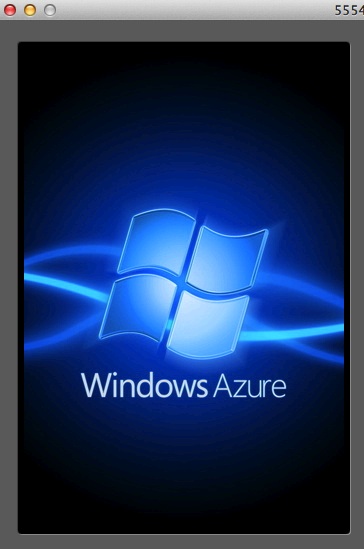 Today we’re going to start working on an Android client for our URL Shortening website.  We’ve already finished walking through how to make setup the PHP website in Windows Azure Websites and how to create an iOS client.  We’ll follow along the same path we did in the iOS client by splitting the Android one into three parts:  displaying the list of URL slugs, displaying details on a specific slug, and adding the ability to add new shortened URLs from the device.  I’m going to be using the latest version of the Android Development Tools (ADT) as of writing which is v20.  Note that v20 made some specific changes in regards to project creation.  Nothing really different if you’ve created Android projects in Eclipse before, but something to look out for.  If you’re not using Eclipse, you should be able to follow along for the majority of the coding stuff without issue.

Open up Eclipse and create a new Android Application Project.  We aren’t going to do anything that requires Google APIs so we can stick with a straight Android API.  Here I’ve chosen the latest and greatest Android 4.1, Jellybean: 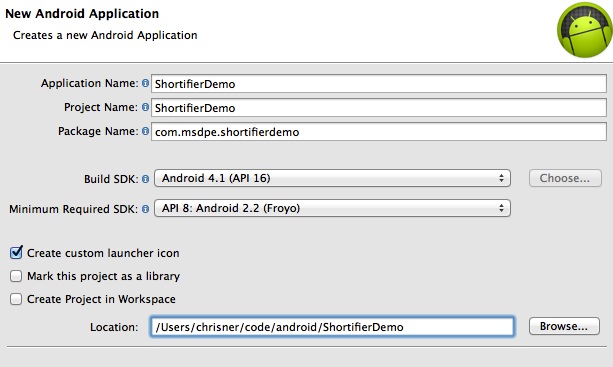 In the next screen, you can configure a launcher icon, and then you can choose what type of activity you’d like to start with.  In this situation, we’ll just use a BlankActivity.  Finally, in the settings for the new activity, just leave everything at their defaults.  When finished, you should be able to run your project (right click on the project in Package Explorer and go to Run As -> Android Application).  You should get something that looks like this (depending on the icon you choose): 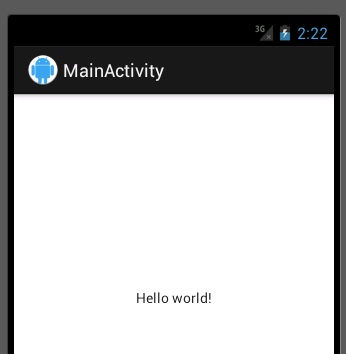 The first thing we’re going to do is go into MainActivity.java and change the class it extends from Activity to ListActivity.  In addition, you’ll need to remove the call to setContentView.  Leaving this in the onCreate method of a ListActivity causes a crash to occur.  Now we need to work on loading our actual data.  To load our data here, we’re going to use a intent service and a service result receiver.  That is to say, when we want to load the data, we’ll start a service that runs in the background.  When that service is done, it’s going to notify our UI (and load our data) by sending a message to a result receiver which then processes a method on our ListActivity.  Let’s get started by adding the a new class to our project and naming it ServiceResultReceiver.  Your class should extend from android.os.ResultReceiver.  Note that this class could be used for any intent service we might call.  It just so happens we’ll only use it for one in this project.  The code for this class is pretty simple:

Now you may notice that Eclipse is complaining that your class needs to implement a method.  Specifically, you need to implement the onReceiveResult method.  Let’s go ahead and add that to our class, but don’t worry about implementing it, we’ll take care of that later:

The next thing we want to do is implement our IntentService.  Add a new class to your project named UrlFetchService and have it extend android.app.IntentService.  Next we’re going to add a few constants to this class:

I won’t explain all of these right now, but will as we use them.  Note that the last variable is actually a ResultReceiver.  This is used to keep track of what the intent service should call back to when it’s finished processing.  You may have noticed that again, Eclipse is complaining about the class missing necessary methods.  We need to add constructors to fulfill the implementation of the IntentService so let’s add these:

Now, we could technically call this intent service and make it run, but it wouldn’t do anything.  The onHandleIntent method isn’t set up.  Let’s set that up:

Here, we’re pulling the Receiver out of the intent passed into the service as well as getting the command.  We then send a message to the Receiver saying that the service is running (that’s the STATUS_RUNNING flag).  Finally, we do a switch based off of command and provided it matches this specific service (PERFORM_SERVICE_ACTIVITY) we run a method named fetchUrls.  If not, we send a message to the Receiver that we’re done.  Note that this means we would use one IntentService to do numerous things.  Each different thing would just have a different command.  For the fetchUrls method, there is a fair amount of code we’ll go step by step:

First, we open a HttpUrlConnection using the URL to our service’s getAll method.  We then create a BufferedReader from the InputStream from the connection.  We then read that data into a StringBuilder.  Because Java’s JSONArray class has an issue with JSON not being properly formatted with braces, we are manually adding them to the data and reading that into a JSONArray.  We then iterate through that array and get each URL’s slug and full URL value.  Then we have code to handle any exceptions that might have occurred.  Lastly, we send a response to the Receiver depending on if we had a success or not.  If it was a success, we pass over the HashMap containing the slugs and full URLs.  Now we just need to handle this back in our MainActivity’s onResultReceived method.

We’re doing a switch off the result code sent back in.  For each of these we’re using the constants we set up in UrlFetchService.  If there was an error or we did not get back a success message, we show a Toast informing the user.  If it was a success, we pull the HashMap out of the Bundle and call showUrlsInListView to update the view.

Here we’re putting the Slugs from our urlMap into a TreeSet so they will be sorted alphabetically.  Then, we’re using those keys to instantiate a new ArrayAdapter and setting it as the adapter on the List.  We have two things left to do:  start the service, and tell Android we’re running a service.  First, go to the onCreate method in MainActivity:

Here we’re creating a new Receiver and telling it that this Activity will handle any call backs.  Then we instantiate our ServiceIntent, fill it with extras, and start it.  The last few changes need to occur to the AndroidManifest.xml file.  These are easily the most forgettable and frustrating changes because if you forget them, you don’t really get tipped off that you forgot them (at least not easily).  Add this under the uses-sdk line:

This tells Android, and anyone that installs your app, that it needs internet permissions.  Lastly, below </activity> put this to let Android know about your service:

Now when you run your app, after a second you should see the URL slugs appear in your list: 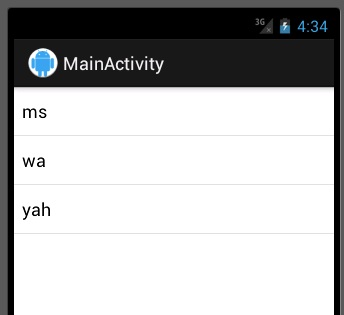 If you’d like to download the finished source code from today’s demo, you can do so here.  Up next, we’ll be working on displaying details on an individual shortened URL.

For a free trial for Windows Azure Websites, sign up here.