Ode to an Opossum 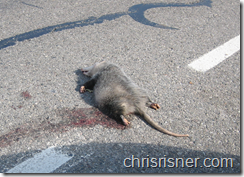 Last night while driving home from some Halloween Bowling, I had the misfortune of getting a bit too close to one of Mother Nature’s wee animals, the Opossum.  While traveling down a 2 lane road with a car coming from the other direction, Flatly (the opossum), started wandering out into the road.  When I saw Flatly I did what you’re supposed to do: I held the wheel firmly with both hands, hit the brakes, and did NOT swerve.  Alas, Flatly was too slow and the Escape was too fast.  We could both feel and hear as Flatly was flattened.  It was not a pleasant experience for everyone (Erin) in the car.  She was not hysterical or anything like that though, and Atomic, who was also along for the flattening, insisted that there was nothing we could have safely done.  To my knowledge this was the first animal I have ever personally driven over.  I didn’t enjoy it, I wouldn’t want to do it again.  Today we drove past the scene of the crime again just to make sure Flatly had truly gone on to Opossum heaven.  Rodents, opossums, rabbits, squirrels, and deer beware… the Escape continues to prowl the streets.

Is that really him? I thought he jumped up and waved back at us, must have just been rigor mortis. Here's the official State of Michigan stance on deers, we'll apply to opossums: http://www.michigan-auto-at...

Yes sir, that really is him. We drove past him Sunday morning and thankfully had the camera handy.

We call that supper down here boy! :)

I can't wait to eat some of that supper in May! Can we make Facey catch it?