Just as a reminder, this is what our UI looks like right now in the storyboard (with no segues between the view controllers): 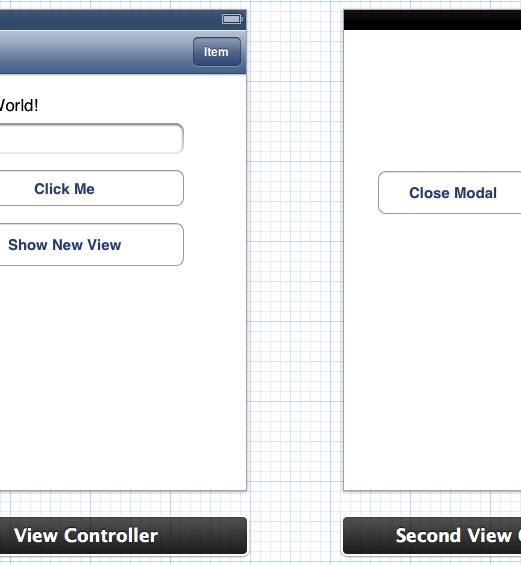 First while you’re in the storyboard, open the Assistant editor.  We’re going to control + click and drag from the Item button to the .h file.  You’re going to create a new Action named tappedNavButton:

There is one other thing we need to do in the storyboard before we can switch to the code.  Select the view tied to SecondViewController and open the Identity Inspector in the Utilities view.  Here we need to set the Storyboard ID: 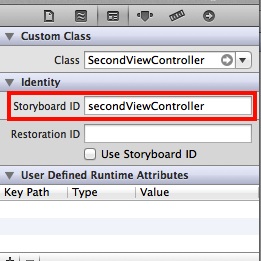 After connecting that, switch over to your view controller’s .m file.  Here, we’ll implement the tappedNavButton method:

If you’ve pushed a view controller before when Xcode used individual Xib (pronounced NIB) files for user interfaces, then this may look a little weird.  Instead of just allocating a new instance of the SecondViewController and pushing that, you need to use the instance of the UIStoryboard that is tied to the view controller you’re in to instantiate the second one.  We had to set an identifier in the storyboard so the storyboard would be able to recognize which one we wanted to instantiate.  If you tried to just instantiate and push an instance of the SecondViewController, the application would run but the view would appear black.  This is because it can still create an instance of the view controller but the code isn’t tied to any user interface.  Now if you run your app and tap the bar button item it will push the second view correctly.

Now we’ll show how to display a view controller in a modal.  Open up the storyboard file and click + drag and drop the Show New View button to the .h file (using the Assistant Editor).  Create a new action named tappedShowNewView: 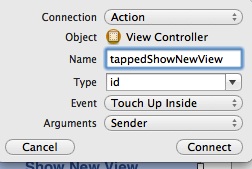 Now let’s switch over to the .m file and see how we implement that method:

Thanks for pointing that out. I'd actually written this article before iOS 6 was fully available so I had missed that (I think you'll see in later articles I'm no longer using methods that are depreciated in 6.0). I'll note this above.

I was just wondering, are Segues considered bad for any purpose? while following along with your tutorial I found Segues more intuitive as opposed to programmatically invoking a view. Plus there is a visual element in the story board that the Segues added which showed the navigation clearly.(which I liked better than programmatically invoking a view)

In so far as I know, segues are not considered bad. Prior to using storyboards, developers had separate xib files for each View Controller and didn't have segues. While I think using storyboards (and segues) is the new "default" it's still possible to showing and hiding views programmatically. It's something that not everyone will do or need to do, but something that's worth covering for the cases where it's required (i.e. presenting a view that's part of a framework, etc)

I liked it! Nice tutorial! It was easy and it worked! Thanks so much! http://www.frameforge3d.com/

We are supposed to manually add the import statement for SecondViewController.h then?

Yes, the import statement isn't mentioned but is something you'll need to do.

Update, I found the problem. I was assigning instigating it to one of my view controllers, instead of the root view controller. Thanks, it works great!