31 Days of iOS: Day 1 - Getting Set Up for Development

For the first article in this series on iOS development, we’re going to talk about how you get set up for development.  Thankfully, Apple has made things very easy on new developers.  The only thing you really HAVE to do, is install Apple’s integrated development environment (IDE): XCode.  Xcode is free for installation to anyone with OSX Lion or Mountain Lion (as of writing) and can be installed from the Mac App Store.  If you haven’t picked up on things yet, you need to be running OSX in order to do any native iOS development.  If you have an older Mac sitting around, it may be powerful enough to use Xcode (provided you’re not taxing the computer in too many other ways).  Let’s get back to talking about Xcode.

Xcode has been around since 2003 and is Apple’s IDE for developing for iOS and OSX.  Xcode supports developing in C, C++, Objective-C, Applescript, and Java (though not recommended).  Because XCode is developed by Apple (and used by Apple to develop their own iOS and OSX apps) they’ve paid a great deal of attention to the quality of the IDE.  Coming from a background where I’ve used many different IDEs, I would place Xcode far above Eclipse (used for Android among other things) and below Visual Studio (at least for some things) as far as the quality of the IDE.  The point is, it’s a pretty polished tool.  As of the 4.0 release (which if you’re just getting started now, you’ll be using an even newer version) Xcode was integrated with Interface Builder so you no longer have to use a separate app to work on the UI.  We’ll cover more of the intricacies of Xcode as we progress along with the series.  For now, let’s go ahead and get it installed.  From the dock, open up the App Store:

With that done, enter “Xcode” into the search bar in the top right of the App Store.  The first result that comes up should be Xcode:

Once you’ve clicked on that.  Finally, near the top left, beneath the logo you’ll see a place to install the app: 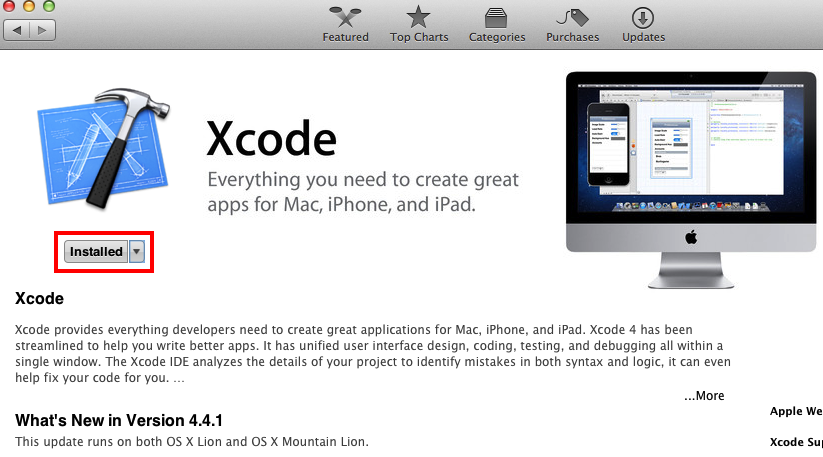 After that, follow the wizard and after a while, you’ll have Xcode installed.  The only other factor you have to consider when you’re thinking about getting set up for development, is what kind of developer program account you want to have.

If nothing else, you should register as an Apple Developer.  This gets you access to samples, forums, WWDC videos, and many other resources.  However, if you want to put apps in the app store (for iOS or OSX) or even put an app on a device, you’ll need to take a look at the “pay-to-play” developer programs.  There are four of these programs for iOS:

When you enroll in one of these programs, you’ll tie your Apple ID to it.  You will then be able to add development devices, generate a provisioning profile, create certificates, prepare apps for distribution, and finally move them into the App Store.

Getting set up for iOS (and OSX) development is very easy.  There is only one program to install (Xcode) and it comes with all the software you need out of the box.  Joining a developer program is also relatively simple (and required if you want to put things on the App Store).  In the proceeding articles in the series we’ll start diving into Xcode and making apps.

This is the best course I have seen! Thank you for the knowledge I have now from the course! I want to write a book as a gift for labor and due time, if you allow me to use some of the information in the course?