TLDR: If you want to grab the sample code, it’s available on GitHub.

I’ve been working on a new Android application and just recently ran into a problem that I was surprised didn’t have a clearer solution. The primary means of navigation in the app was going to be a Navigation Drawer. If you’ve used an Android device, you’ve almost certainly seen and used this design pattern: 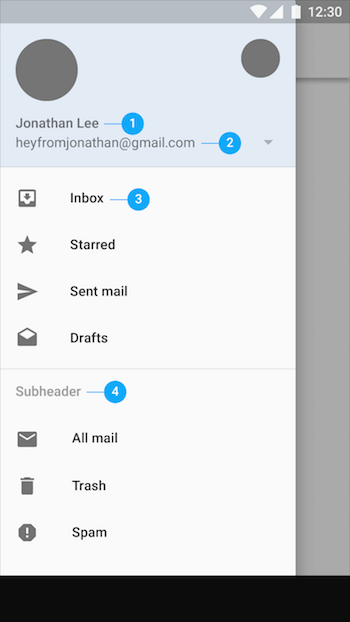 The Navigation Drawer is a slide out menu that enables users to navigate around the different areas of the application. Typically, when the user taps one of the items on the menu, the content page is reloaded. Instead of starting a new activity where the user has to go back (via the back button or a back button in the top left of the screen), the navigation drawer (usually via the familiar hamburger button) stays available as you go from one area of the app to others (it seems like it’s common for a few pages to launch and require the back button such as Settings and Help).

If you go into Android Studio right now and create a new application and base it off the Navigation Drawer Activity, you’ll get a very basic app with a single activity and the nav drawer will be set up fairly similarly to what you see above. What you won’t see though, is how to actually navigate between different “content pages” when you tap the different menu options in the nav drawer! If you are familiar with some Android development, this might be a bit surprising. In earlier days of Android development the way you got from one page to another was to have several Activities and to use an intent to launch each new activity. This doesn’t really mesh with the nav drawer though as you’d have to have the same nav drawer on several activities

When Android moved from 2.X to 3.X, they were moving from only focusing on phone form factors to also tablets. 3.X was never officially released to run on phones, but they started thinking about how to make page constructs that weren’t just in the form of activities tied to layouts. The solution they came up with was Fragments. A fragment is a way of composing a part of an activity. It has it’s own life cycle, deals with it’s own inputs, and each activity can contain multiple fragments. The easiest way to see fragments in action is to create a new application and use the Master / Detail Flow. This creates an application that works on both tablets and phones and shows how you can show multiple fragments at once (on the tablet) or a single fragment (on the phone). The bulk of the code is the same regardless of if you’re showing one fragment or both which is part of the reason you use fragments, so you don’t have to reproduce code in multiple places.

The problem I ran into with the Navigation Drawer sample is again that it doesn’t really demonstrate how you should do navigation inside of it. As I said before, you can always use the old route of launching new activities. However, you’ll need to then reuse the navigation drawer everywhere. This can be done and someone I was tweeting with about this issue even put together a sample of it on GitHub. Unfortunately, if you run that, you’ll see that the navigation between different activities isn’t as smooth as I’d like it to be. Namely, the nav drawer doesn’t slide back before showing the new activities content. What I want to happen is when the user taps an item on the nav drawer, the content page should already be loading / loaded while the drawer slides back to be closed. As far as I’ve seen so far, this can’t be done with multiple activities. But it can with fragments. One thing to note is that I believe you could also do custom view inflation and deflation though you’d be wrapping everything in one activity.

NOTE: After I’d already started this post, karnamsupreeth updated his code sample to provide a brief delay after tapping a nav item and launching the new activity. This was MUCH closer to what I originally thought of and is a valid way of handling things if you want to use Activities. I’ll continue to post the fragment solution but I’d definitely consider using his example as well. It still doesn’t actually load the new activity until after the delay so you’re note sliding the drawer back to reveal the new content that has been loaded.

Before I get into the specifics of adding fragments to the nav drawer sample, I just want to say that I don’t hate fragments, I just don’t like them. Just a few searches online will yield a lot of conversations about whether fragments are good or bad. Because fragments live inside of an activity, and both the activity and fragment have life cycle and event handling, things can be overly complex. Additionally there are memory implications and other concerns you might run into. Suffice to say, I’m going forward with fragments in my solution though that doesn’t mean I’m sold on them being the best solution.

When you first create the Navigation Drawer Activity, there are 5 files we’ll look at:

Now I’ve already said that I don’t think this is the best example of how to do navigation because it doesn’t show you what to do when you tap an item in the nav drawer (it only demonstrates how to get the event when an item is tapped in the onNavigationItemSelected method). Furthermore, from looking at how it displays the content, it’s not clear what to do. In the MainActivity’s onCreate method there is a call to:

This is what you typically see in an Activity and binds the UI of a layout file to the Activity code. In this case, the activity_main layout contains the nav drawer and an include statement for the app_bar_main. The app_bar_main in turn contains the toolbar at the top and does an include on the content_main. It would seem like the solution is to replace the content of the second include whenever the user taps an item on the menu. However, you can’t really replace an include like that. We could use custom views and inflate and replace them whenever we want, but that might require a significant amount of additional work (or maybe not, hopefully someone can provide a solution that does that). Adding fragments ends up being relatively easy.

Adding Fragments to the Sample

First, open up the app_bar_main.xml, comment out the include and add a new FrameLayout:

This FrameLayout is what we’ll use to load our fragments into. Next, you’ll want to add a few fragments. To do so, right click on your project, or go to File –> New and from the Fragment list choose Fragment (Blank). Add at least two fragments to your project so you can demonstrate moving between them. The next step is to load a fragment when the app first launches. Go to the MainActivity’s onCreate method and put the following in after the call to setSupportActionBar:

You’ll then need to add OnFragmentInteractionListener to the interfaces your MainActivity implements and also implement the onFragmentInteraction method. Finally, in the onNavigationItemSelected method, you can add the ability to load different fragments when menu items are tapped:

That’s all you need to do to implement fragment loading in your Navigation Drawer. What the user taps a menu item, the drawer will slide back in smoothly and the new fragment will have already started / finished loading. This also prevents any possible jankiness that you could see when launching a new activity. One last thing to note is that if you switch to a different fragment and then rotate the device or cause another recreation of the activity, the code above will cause the first fragment to be reloaded. One easy way to deal with that is to wrap the fragment block in the onCreate method in a check to see if the savedInstanceState is not null like this:

One actual last thing is that there are definitely optimizations you could make on the code and event handling here but this is a good start. You can grab the source code from this demo on GitHub.

this is awsome! I tried to figured out the problem by following some ‘Android’-Books … but nothing works for me :( Your Example is easy to understand and just great!

Hey Chris, thank you so much. NavigationDrawer and Fragments are both new to me so your post helped me out a lot - much appreciated :-)

Thank you Chris, help me a lot