As a team building event at work, we did an Egg Drop.  The idea was that each team would build some contraption to carry an egg safely down from a 4 story drop.  My team at work decided that it would be pretty cool, and seasonably awesome, to put the egg in a pumpkin.  So mid-way through October, we picked up three pumpkins from a local greenhouse, dug them out, filled them with popcorn (it’s a shock absorber), and placed our egg in it.  As a test, we threw the pumpkins off the highest point we could find while it still being safe to drink beer: my roof.  You can see in the below video that we were able to successfully drop the pumpkins off the roof without the egg breaking.  Unfortunately when we made our final egg dropping device it just didn’t end up protecting our egg.  So while you can’t be happy knowing our death star protected it’s precious cargo, you can be happy to know that I don’t mind throwing pumpkins off of my roof: 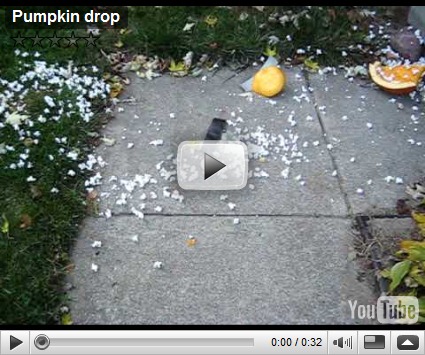