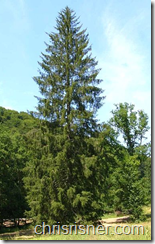 With my birthday and a 4 day week quickly approaching, I ended up taking last Wednesday through this Tuesday off from working out and instead to gorge upon a diet of fatty food, beer, liquor, and nicotine.  During that time, I decided to do something I’d been planning to do for several weeks now, plant some trees in the backyard.  Not just any trees though, trees that would help me cut back on yard work.  How is this possible?  The spruce tree, specifically the Norway Spruce.  The spruce tree is acidic so it will kill the grass around the tree.  Now, most spruce trees grow pretty slowly, but not the Norway Spruce.  It will grow up to a meter (or about a yard for you non-metric sorts) a year for the first 25 years.  So all of this means the grass in the far end of my backyard will die and I will have to mow less.

Some of you are probably thinking, “What the hell is a morlock doing planting trees?”  Don’t worry, I have two things to say to you.  First is that these trees will aid in blocking the sun (that great big spherical thing in the sky that keeps me from leaving my cave like home) and secondly I’ll burn anything that falls off the trees, thereby destroying our environment and making it safe for morlocks everywhere to wander outside.

Now that the weekend of lush like living is over, I’m getting back to the P90x program.  I’m officially 7 days behind though.  Tonight was another night of Shoulders and Arms.  One thing I will say of the (minimal) workouts I’ve done from P90x is that each and every one has left me pretty sore which I take to mean they’re actually doing a decent job.  I would like to get more cardio in to my routine though (perhaps do more doubles) as the 3 cardio X routines just don’t seem to do enough (though I’m use to running).  In an effort to keep with the program, I’ll hopefully update more about working out.

If this turns into another P90X blog I'm out.

I can't do that to the only loyal reader I have!

Oh I read as well, just lurk more. I agree no more cultish p90X talk more shenanigans. I like the tree story.

Todayfive finger shoes bargain all-embracing flights are not difficult to acquisition and buyvibram five finger. Application several methods you are abiding to acquisition a abatement flight to your destination. A few vibram shoes
tricks to accomplishing this includes arcade around, application the web as your capital tool, biking on assertive days, five finger
analysis for vibram five finger shoes
annihilation endure minute and applicationvibram Five Fingers KSO
accepted sense. These are all key tricks to acquisition absolutely what you wish to you destination at abundantvibram Five Fingers Sprint
beneath amount to you.

The web today can vibram Five Fingers Trek
action a quick way to analysis prices on five finger sprint
air fares locally and all-embracing flights. A key to accepting the best accord can be just to browse around, five finger trek
and analyze what you find. five finger speed
Through a bit of harder plan you are abiding to acquisition what you want.