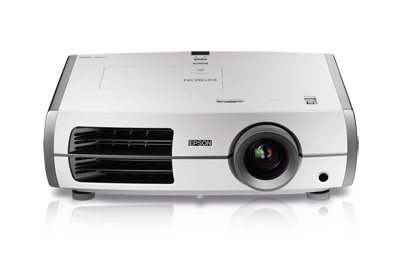 After visiting AtomicInternet’s house and enjoying / enduring the awesomeness of his projector one too many times, I decided to upgrade my entertainment value.  After informing him of my plans, he immediately and repeatedly shared with me this review which he in turn obtained from the Senator.  While the prospect of spending an extra $600 not that appealing, I was convinced in the long run to pony up and get the Epson HC 8100.  Deciding to just move from a TV to a projector wasn’t exactly an easy one.  I couldn’t just move the TV out of a room and put the projector on a table in that room and call it a day.

To begin with, I wanted to put the projector on the middle floor (I have a tri-level) of my house.  While this would have provided the widest viewing area, there would have been no way to contain and block the light in the room on the main floor.  Outside of making the floor hideous with blackout curtains hanging everywhere, there wasn’t a way to make it work.  Much to Erin’s pleasure, this meant I was back to putting the projector downstairs.  Sadly this didn’t eliminate all of my problems.

Wanting to stream a lot of video, wireless wasn’t really an option.  Unfortunately this meant I would need to run some network cable into the downstairs (to where the projector would be), to the main floor (where I would move the TV and Media Center), as well as into the bedroom so I could eventually stream to there.  After ordering wire from Monoprice I drilled some holes and climbed up into the attic.  Running the wires ended up being almost too easy with the exception of one place.  Downstairs, I needed to run the wires from the living room, into the ceiling, through a shaft about 6” tall (from the ceiling of bottom floor to the bottom of the top floor) and into the laundry room.  I solved this problem by taping together about 8 wire hangers (after straightening them) and taping one wire to that hanger.  After running that through the floorboards, I taped the other 5 wires (I was running some speaker wire as well) to the wire that had already been run through and pulled them back to the laundry room where all my wires would meet.  After this I just had to splice and test the wires I’d already pulled through the walls to make sure they were working and then put some nice looking plates in front of them.  The last step prior to mounting the projector was to move a light switch that would be right in the projector screens path on the wall downstairs.  Despite having to cut our a gang box and having to connect and extend actual power lines, this step ended up being not too difficult.

After all this, I just needed to unbox the projector.  Once that was done, Atomic and the Senator again helped me to drill in the projector mount and hang the projector downstairs.  When all was said and done, I cleaned up a few things and was left with a pretty good looking projector hanging from the ceiling.  I moved from a 42” screen up to a 106”.  Quite the improvement and one hell of a way to watch movies and play video games.